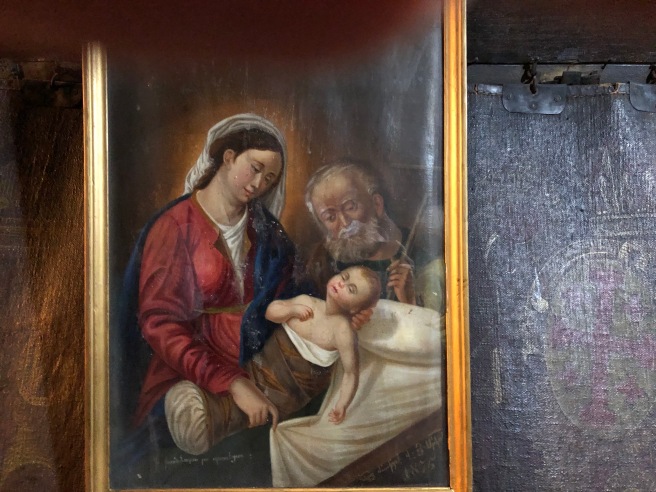 At the Church of the Nativity in Bethlehem

As Christians and Jews we are on this journey together.

In the best of all worlds, I would not have chosen for us to travel to Bethlehem on Yom Ha Shoah, Holocaust Remembrance Day.  Nor would I have picked that day to walk the Via Dolorosa and visit the Stations of the Cross where, according to Christian tradition, Jesus stopped before his crucifixion.

Although I would have chosen another day, those are vital spots for us all to visit.

The next day we did what I would have wanted to do on Yom Ha-Shoah, visit Yad Va-Shem, Israel’s memorial to the victims of the Holocaust.  On Yom Ha-Shoah I am sure Yad Va-Shem was overrun with visitors. And the day after when we visited, it was very crowded too.

In Bethlehem I recalled the memory of my 1975 attendance at Midnight Mass on Christmas Eve (See my essay, “Andrea”) and my last tour of the Via Dolorosa in 1996.

I had a special reason to hire a Palestinian Christian guide to take me on a personal tour of Via Dolorosa that year. My good friend and tennis partner Rev. Steve Hancock had invited me to speak from his pulpit at the Second Presbyterian Church on Good Friday.

Now, Rabbis being invited to preach in churches is not unusual, but in those days a rabbi speaking in a Church on Good Friday was all but unheard of.

Why? Good Friday is the day the most anti-Jewish passages from the Gospel of John are read in churches. Historically Good Friday was the day when Christian preachers incited the population to pogroms against Jews in Eastern Europe and other places.

Good Friday was a day when Jews hid in fear of their lives.

It was not a day when Jews were welcomed to deliver sermons in Christian pulpits. It was also not a day when Christian Pastors followed their own worship by attending Passover Seders as Rev. Dr. John Danner and Rev. Deborah Kunkel of our partner church, Sanibel Congregational UCC did as most welcome guests this year.

How glad I am that we live in these days and not those.

But no one should ignore the ominous events of recent days. The shooting in Poway, California at a Chabad synagogue came six months after the horrible attack at the Tree of Life Synagogue in Pittsburgh.

Ours and many other congregations hire off duty police as a security detail during our worship services.

A few days ago, the International Edition of the New York Times published the most blatantly anti-Semitic cartoon one could ever imagine.

It depicted a blind President Trump with a kipah on his head led by a dog with a Jewish star around its neck, a dog with the face of Israeli Prime Minister Benjamin Netanyahu.

That the New York Times published such a thing is an abomination. Their apology and their withdrawal of the cartoon do not undo the damage. These gestures are too little and too late.

But the trip shared by Bat Yam Temple of the Islands and Sanibel Congregational UCC is right on the money.

We know that anti-Semitism in particular and hatred in general are on the rise around the world.

We also know that our job is to understand, respect and affirm our legitimate differences.

But we also have the sacred obligation to forge our shared values into a force — greater than the sum of its parts — that works to build a better world for our children, grandchildren and all the generations to follow.

4 thoughts on “We Go Together in Israel”