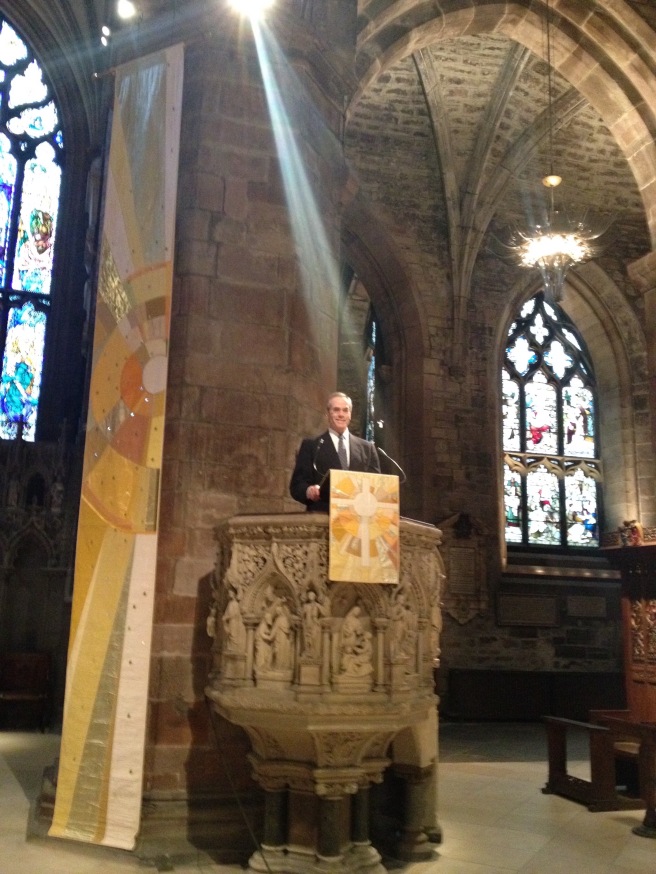 On Sunday, January 31, I had the privilege of being (I was told) the first rabbi to deliver a sermon at the historic St. Giles Cathedral, the Mother Church of Scotland.

I consider it more than a coincidence that event took place on the 45th anniversary of my father’s death.

The connection is particularly stark because my sermon was part of an interfaith Holocaust Memorial Service, and my father was a survivor.

He was arrested on Kristallnacht, November 9, 1938, and taken to Dachau where the Nazis shaved his head and beat him. But he was so very fortunate because seven out of every nine Jews who lived in his native city of Leipzig in 1935 died in the Shoah.

Because my father’s relatives in the United States had the necessary papers in order, they were able to secure his release after only a few weeks. He came to this country, met and happily married a beautiful American woman, and fathered my sister and me.

Yes he was so fortunate to escape, but I know the residual effects of his suffering contributed to his death at age 57 while his two older brothers—who left Germany earlier—lived well into their eighties.

When the Beadle of the Cathedral formally summoned me to ascend the St Giles pulpit, my mind flashed back 45 years to when I received that horrible call from my mother while I was studying in Jerusalem.

Back then an international phone call was a very big deal. If you got one, it was your birthday, some other special occasion, or something was very wrong.

When my landlady, Mrs. Daniel Auster, widow of the former Mayor of Jerusalem came into my room at 5 AM to tell me my mother was on the phone, I knew it could only be one thing. My precious father, in my mother’s words, “was gone.”

The long plane ride home—which stopped in Paris was excruciating. Sitting next to me on the first leg of the flight was an ebullient woman on her way to Paris to celebrate her daughter’s wedding.

I did not have the heart to deflate her joy by sharing the reason I was on the plane. My stomach was in knots as I listened to her.

I spent thirty days at home before returning to Jerusalem to continue my studies. They were precious days of reflection and remembrance.

They confirmed for me the wisdom of our tradition in advising us to take sufficient time to absorb the blow when a loved one dies.

I loved my father and admired him, but there are so many questions I would have liked to ask that I never did.

Why didn’t you leave Germany earlier? What was it like when you first came to the USA?

You always acted like you loved me, but why did you never tell me?

In the days following my second open-heart surgery in 2012, I found myself depressed and concerned for my future. I sought therapy and was not surprised when the doctor zeroed in on my relationship with my dad.

“You seem to have never been able to please him,” he noted.

I credit the Eternal One and the therapist for the blessings I have enjoyed since my surgery: the three months I spent as rabbi in Milan, Ben’s marriage to Kristin, the birth of our fifth grandchild, Flora, the completion of my book, it’s translation into German, the two extended periods Vickie and I spent in Germany, the many places I have been privileged to speak, and of course, our recent trip to Scotland.

Indeed, the future about which I fretted at the time of my surgery has turned out very nicely.

I believe in the things I am doing and hope they make a small difference for good.

But I know the doctor was correct. I still want to please my father. And maybe, just maybe I am beginning to believe I am.