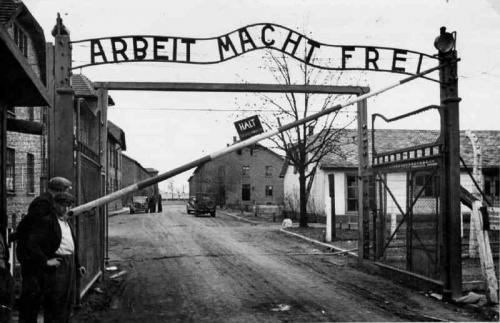 To commemorate Yom Ha Shoah, I share the following reflection of my visit to Auschwitz.

Unless it is a very hot day, I am always cold. It has been that way it, it seems to me, since the frigid night in February when my Hamilton College Hockey team played MIT in Boston outdoors.

I was not one of the team’s better players (an understatement), and I spent much of the game on the bench. Since then, I have been cold.

And so, as much as any of the horrible sufferings people endured or succumbed to at Auschwitz, I think of the cold.

The thin pieces of rag that inmates wore, and their often bare feet provided no shield at all against the brutal Polish winter.

It was not cold by normal standards when we visited Auschwitz. But I vowed not to be cold. I wore long johns, knit cap, gloves and four layers of clothing on my upper body.

We came first to the death camp of Birkenau. The stark barrenness and sense that we were in the middle of nowhere combined with the knowledge of what happened there evoked a strong emotional response.

And despite how warmly I dressed and the comparatively mild temperature, I was cold.

Then we made our way to “the main Auschwitz.” Tour buses and crowds greeted us. It seemed we were visiting just another tourist attraction.

The only thing there that I needed to see with my own eyes—given how many other Holocaust museums and memorials I have visited—was the infamous “ARBEIT MACHT FREI” sign over the main gate.

It was smaller than I imagined.

But then our friend, Pastor Martin Pommerening pointed out something I had not known.

The B in ‘ARBEIT’ was upside down.

It was a subtle protest by the workers forced to make the sign against its message. They were telling the world that the sign above the Gate of Auschwitz was a lie.

Then Martin asked if the second letter, the “Bet” ב has any special significance in Judaism.

The rabbis make much, I answered, of the fact that the first word of the Torah, ”Bereshit” (In the beginning) begins with “Bet.” “Bet” is the first letter of the Hebrew word for B’racha ”which means “blessing,” the blessing God charged Abraham and all of us (Genesis 12:2) to make of our lives.

The rabbis also noted that God began Torah with the letter “Bet” because the Bet is closed beneath it, behind it and above it. That teaches that what happens when we are placed beneath the ground, what happened before creation, and so much about God above are beyond our ability to know.

But, the Sages, continued, the Bet is open in front.

That Midrash symbolizes for me the main message I have tried to proclaim in speaking these past three years in synagogues, schools, and churches in Germany:

“We cannot undo the past, but the future is ours to shape.”

I could not leave Auschwitz soon enough, and as we drove away the sun peeked through the clouds as we contemplated the future we wish to shape.