Below: Pastorin Britta Taddiken, who has become a dear friend to Vickie and me, helps me set up for my “Ansprache” at the Thomaskirche Motet service last Friday afternoon. (Photo: Dr. Robert George Moore) 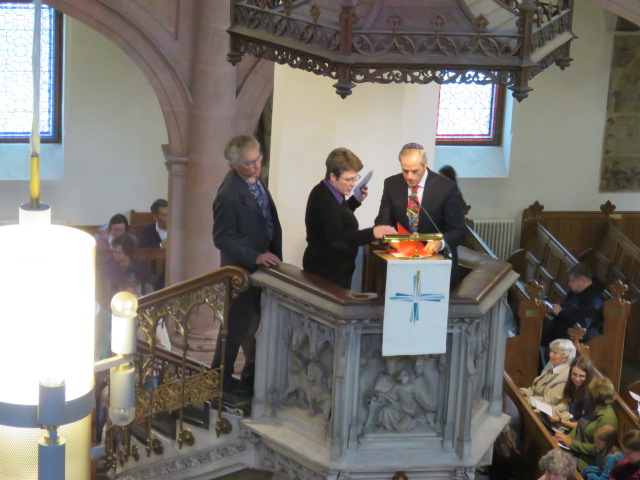 As I climbed the 16 steps to the “Preacher’s Perch” in the famed Thomaskirche in Leipzig at the Motet service, Friday afternoon,** many thoughts filled my head.

First and Foremost: How wonderful that the city my father left as a prisoner, welcomes me back to preach from this historic pulpit.

But nagging questions came to mind:

Knowing that none of the (according to the estimate of Pastor Martin Hunderdmark who partners with Pastor Britta Taddiken as Spiritual Leaders of theThomaskirche) 1500 people packing the Cathedral had come to hear me, what were they thinking when I was introduced? What will they think as I speak and after I finish?

I imagine some thought, “What do we need with a rabbi interrupting the beauty of the Motets by Johann Sebastian Bach, Heinrich Schütz, Claudio Monteverdi and Johann Kuhnau? Why in the midst of such beauty does he again remind us of Germany’s shame?

I imagined some would laugh, at least inwardly at my horrid –despite hours of practice – German pronunciation. I cannot blame them for that.

But my two biggest questions were:

As I spoke I could see that people were paying attention and that clearly some resonated to my message to use the lessons of the past to shape a better future.

After the service, several people made a point of seeking me out to thank me for speaking. Pastorin Britta Taddiken told Vickie that does not usually happen at the Motet service.

That was nice to hear.

But the questions about my father and my own motivations remain: Would he really want me to be here? Am I doing this to make a difference and not just for my own ego?

I ask these questions over and over, and the best and most honest answer I can give is: