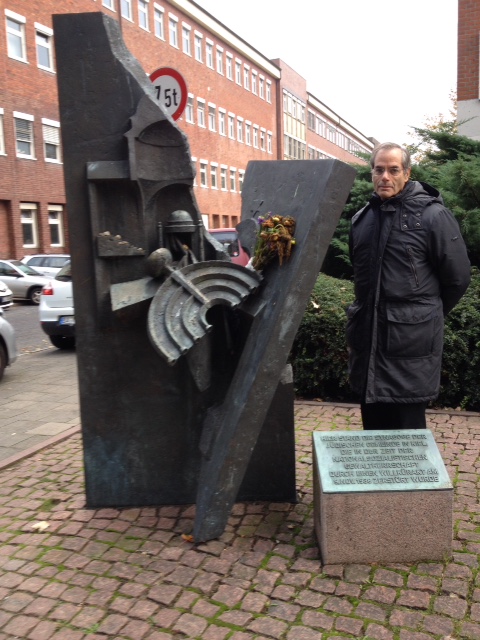 Memorial at the site of the Great Synagogue of Kiel, Germany, that was destroyed on Kristallnacht, November 9-10, 1938. I will speak at the Kiel Kristallnacht commemorative, sponsored by The Organization for Christians and Jews Working Together, the evening of November 9, 2016

Tomorrow, is the anniversary of Kristallnacht, known to Germans as Pogromnacht, the nationwide pogrom perpetrated by the Nazis against Germany’s Jews on November 9-10, 1938. Historians consider this event the formal beginning of the Holocaust.

As we commemorate this somber anniversary, I want to share an act of heroism by a German citizen, a ray of light that momentarily pierced the darkness of Nazi terror.

A Jewish woman was riding home from work on a city bus when storm troopers boarded the coach to examine the identification papers of the passengers. The SS men ordered all of those with Jewish papers to leave the bus and get on a big truck waiting nearby.

As the soldiers made their way through the bus, a Jewish woman began to sob softly. When the Gentile man next to her asked her what was wrong, she answered that she was Jewish and the soldiers would surely take her.

All of a sudden, the man shouted at her, “You stupid wretch! I can’t stand being near you!” The SS men asked the man what all the shouting was about.

He pointed to the woman and sneered, “My dumb wife has forgotten her papers again. She does this all the time. I’m fed up with her.”

The SS men laughed, shook their heads, and moved on.

The woman never learned the name of the German stranger who had saved her life.

4 thoughts on “A Ray of Light that Pierced the Darkness”