The Jewish harvest festival of Sukkot begins tonight, five days after Yom Kippur. We celebrate by building a sukkah, a small hut outside our homes to symbolize the temporary homes of our ancestors while they traveled through the desert after being freed from slavery in Egypt.

“A child who has the experience of building a sukkah,” my Theology/Liturgy Professor, Jakob J. Petuchowski, of blessed memory, used to tell us, “has a Jewish experience worth six months of Sunday school.”

The outstanding American writer, Noah Gordon, in his 1964 best-selling novel The Rabbi, captured the essence of just how important a sukkah can be for a child: “The bond between Michael and his zaydeh (grandfather) grew stronger during the early fall, when the days began to shorten and the autumn feast of Sukkot drew near. Each autumn during his four-year stay with the Rivkins Zaydeh built in their postage-stamp back yard a sukkah, or ceremonial hut. The sukkah was a small house of wooden planks covered with boughs and sheaves. It was hard work for an old man to build it, especially since hayfields, corn shocks and trees were not plentiful in Brooklyn. Sometimes he had to go deep into Jersey for raw materials, and he badgered Abe for weeks until he was driven to the country in the family Chevrolet.

‘Why do you bother?’ Dorothy asked him once when she brought a glass of tea to where he strained and perspired to raise the hut. ‘Why do you work so hard?’

‘To celebrate the harvest.’

‘What harvest, for God’s sake? We’re not farmers. You sell canned goods. Your son makes corsets for ladies with big behinds. Who has a harvest?’

He looked pityingly at this female his son had made his daughter. ‘For thousands of years, since the Jews emerged from the Wilderness, in ghettos and in palaces they have observed Sukkot. You don’t have to raise cabbages to have a harvest.’ His big hand grasped Michael behind the neck and pushed him toward his mother. ‘Here is your harvest.’ She didn’t understand, and by then Zaydeh had been living with them long enough not to expect understanding from her.”

Our family sukkah to which we invited congregants every year was a very precious part of our family’s Jewish identity over the years. Our children were fascinated by it as babies, loved decorating it as children, and helped set it up when they were older. They loved inviting their non-Jewish friends over to help decorate. Now they have children of their own, and celebrate Sukkot with them.

Each year we looked forward to having our congregants join us for a reception in the sukkah. As much as our sukkah meant to our children, it meant at least as much to us.

In addition to the huts our ancestors lived in when they wandered through the desert for 40 years, the sukkah today symbolizes that too many have homes to live in all year around that offer no more protection against the elements than these fragile huts. The Sukkah teaches us that the less fortunate are our responsibility. We cannot in good conscience turn away.

Yes, Rabbi Petuchowski was right about the sukkah and six months of Sunday school. In fact I think he might have  understated the case.

In Bad Segeberg, Germany, our hosts Pastorin Ursula Sieg and Pastor Martin Pommerening got wind of how important the custom was to us back home and took it on themselves to erect a sukkah in their backyard.

This gesture means so much to us. This sukkah more than any other we have ever enjoyed symbolizes our hope for inter religious cooperation and reconciliation that inspired us to spend these ten weeks in Germany.

Eternal God, spread סוכת שלום “the Sukkah of Peace” over us, over all Israel and over all humanity! May we may dwell in it together in harmony! 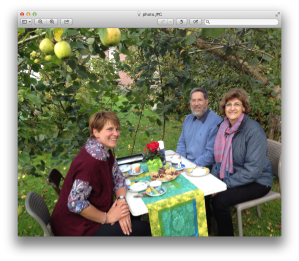 Pastorin Ursula Sieg (l) Pastor Martin Pommerening and my wife Vickie sitting in the magnificent sukkah Martin and Ursula erected for us to honor the festival of sukkot in their backyard.