When Jacob dies, Joseph’s brothers fear that he will take revenge on them for selling him away as a slave (Genesis 50:15).

When his brother’s throw themselves on Joseph’s mercy, he speaks tenderly to them saying, “Though you intended to do me evil, God has turned it to good to bring about the saving of many lives” (Genesis 50:20). He then continues to protect and support them during the ensuing years of famine.

The brothers prosper in Egypt, and Pharaoh himself affirms the children of Israel’s covenantal connection to the Promised Land by responding to Joseph’s request to bury his father there with the words: “עלה, Go up,” up to the Land of Canaan. (Genesis 50:5,6). Indeed, Genesis ends, as it were, with “ … and they all lived happily ever after.”

Of course they did not all live happily ever after. It was only a peaceful interlude until, as we read next week, “a new king arose who knew not Joseph (Exodus 1:8),” and enslaved us and threw our babies into the Nile.

Vickie and I have recently returned home from a ten-week stay in Germany. As I ponder our experiences, I wonder: was our journey part of a happy ending after perhaps the most horrific period in Jewish history? Or is it, like the ending of Genesis, an interlude of calm before the next storm arises?

Our visit gave us many encouraging and uplifting opportunities. We taught hundreds of high school students about the Holocaust and basic Jewish values in an exhibit about the life of Vickie’s mother, Stefanie Steinberg. Stefanie, who was born in Breslau, is still an active artist at 93. Her idyllic childhood came to an early end when her family had to flee the Nazis. Although Stefanie never could complete her high school education in the 1930’s, grateful German students now preparing for their graduation send her affectionate emails and voice messages. They thank her and us for the chance to learn about her struggle and vow that their generation will not allow such things to happen again.


At the Jüdische Gemeinde in Kiel, it was my joyful experience to speak at High Holy Day, Festival and Shabbat services and lead adult study sessions. But each time we walked to the modest synagogue, we passed the monument on the site of the magnificent synagogue that once was a landmark in Kiel before the Nazis destroyed it.

While we were in Germany, I delivered ten different addresses in Lutheran churches, including one where a Nazi found guilty at Nuremberg of horrible war crimes once served as pastor. The current pastor, Martina Dittkrist, invited me to speak as part of the church’s ongoing atonement for that pastor’s crimes. I saw tears in many eyes as I spoke of reconciliation and building a better future. 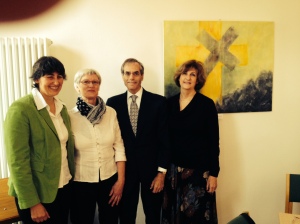 In Leipzig on Kristallnacht, the city where my father was arrested on that fateful night in 1938, it was my privilege to speak at three separate commemorations. Certainly it was a happy ending for Vickie and me to be welcomed as honored guests to the city my father left as a prisoner bound for Dachau 76 years ago.

In Berlin it was also my privilege to conduct a seminar for rabbinical students and to deliver the semester opening lecture at the School of Jewish Theology at the University of Potsdam. How thrilling to see serious Jewish study once again encouraged in Germany and supported by the German government.

There is so much to be grateful for in our experience that we cannot help but revel in the joyful reality of Germany’s present. And yet we can never and should never forget the past. I keep wondering, “Are all of the wonderful experiences we enjoyed in Germany evidence of a true happy ending? Or is it just another interlude of calm?”

The evidence of Jewish history cries, “Interlude.” Time and again we have been welcomed and lived peaceably in places. But then the economy changed, our people were blamed, and we suffered persecution, forced conversions, murderous pogroms and exile.

There is reason for concern. We hear and see the evidence of resurgent anti-Semitism throughout Europe. Recent incidents in Belgium, Hungary, France and other places are frightening. The future of Jewish life in Europe is far from certain, but there is much we must continue to do.

We must do what is necessary so that Israel will always be strong. Had there been an Israel in 1935, there would have been no Holocaust. Therefore we must continue to defend Israel against those who question her right to live as a Jewish state in the sea of hostile Arab/Islamic states in the Middle East.

At the same time we must continue the fight for Progressive Jewish legitimacy in Israel. Our growing movement there provides an uplifting alternative to Haredi fanaticism on the one hand and secular skepticism on the other.

We must also continue to press for the equality of Progressive Judaism with Orthodox Judaism in every country in the world. Although it is an uphill struggle, we must spare no effort to strengthen our Progressive communities worldwide.

The values of Progressive Judaism demand—not just allow—that we think critically and independently. They demand that we study Torah with rigor to find in it the lessons that inform our lives and make us more worthy partners with the Almighty in forging a better world.

The pattern of Jewish history represented by the end of Genesis and the beginning of Exodus is a somber warning, but its repetition is not inevitable.

If we keep Israel strong—
If we do what we can to strengthen Progressive Jewish life and legitimacy around the world—
If we avidly pursue our destiny as a people called by the Almighty to help create a more just, caring compassionate society on earth—
Then I believe with all my heart, we shall reverse the pattern of history, and we shall endure and thrive. Moreover, we shall be able to say to those who wish us ill, as Joseph said to his brothers in the week’s parasha, “Although you intended to do me harm, God has turned it to good.”

Rabbi Stephen Lewis Fuchs, D. Min., DD, is Past President of the World Union for Progressive Judaism and Rabbi Emeritus of Congregation Beth Israel, West Hartford, Connecticut, USA. He is the author of What’s in It for Me? Finding Ourselves in Biblical Narratives.

http://www.rabbifuchs.com
Twitter: @Rabbifuchs6
FB: What’s in It for Me? Finding Ourselves in Biblical Narratives

3 thoughts on “Happy Ending or Just Another Peaceful Interlude”

Join 175 other subscribers
Follow Finding Ourselves In Biblical Narratives on WordPress.com